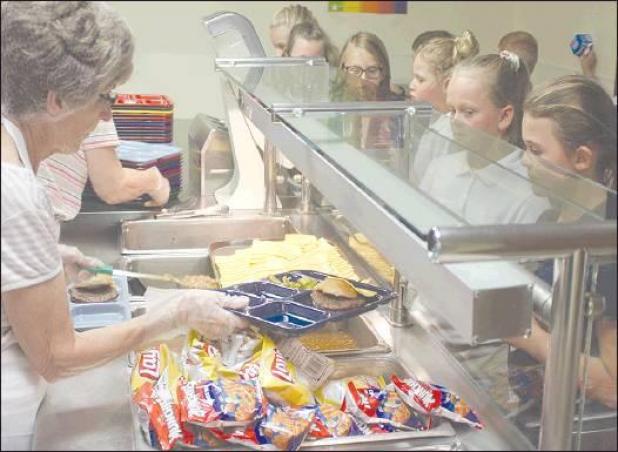 St. Francis students enjoyed the first day of school lunch Aug. 13 as the 2019-20 school year got under way.

Accusations made against city

Humphrey’s comprehensive plan and zoning regulations should be nullified, according to court filings made by Charles Moser Aug. 13.

In the Platte County District Court filings, Moser is seeking Declaratory Relief, which is a judgment that determines the rights of parties without ordering anything be done or awarding damages.

In this case, Moser is seeking the nullification of Ordinances 743 and 744, which established the Comprehensive Development Plan and the Humphrey Zoning and Subdivisions Regulations for the City of Humphrey.

Moser is holding Mayor Lonnie Weidner, the city council, planning commission and board of appeals accountable for these actions.

Court filings list about 17 violations of the Open Meetings Act, ranging from no posted agenda in the newspaper of record, notice of meeting not posted in three public places, minutes of meeting not published, location of meeting not mentioned, change of venue without proper notice, hard copy not made available to the public, and not enough time allowed for proper discussion at a meeting.

Moser, in the court filing, states he is requesting an investigation into a conflict of interest because most of the members of the planning commission and board of adjustment are in the same real estate investment club(s) and/or business partners. “They create fly-by-night Limited Liability Companies to mask this relationship, and this arrangement gives them ultimate control over land use and what businesses can be in Humphrey, thus eliminating competition or preventing someone from having a business (a form of discrimination).”

Moser also is “requesting an investigation into these companies and individuals for using the Planning Board, Board of Adjustment and the two ordinances to conspire to steal my property. This is conspiracy to defraud and grand theft larceny.”

He further states, “I have had more than one individual tell me this is the only reason I was kept off the two boards, because I was their main target! They want to make an example out of me by being able to condemn my land and take it, then others would fall in line.

“If you look at most of the zoning plans and ordinances being passed today in cities across the country, it gives these zoning commission illegal and unconstitutional power to seize private property at will. It is my belief that this group of people had to have some kind of law in place before they made their move.

“I would like to point out that this whole process, from beginning to end, has been nefarious, shrouded in secrecy and had a total lack of transparency. For 15 months there were no hard copies made available for public inspection, and this was to keep hidden all the questionable rules and regulations contained within them. This is not a planning board, but an illegal real estate conspiracy scheme and a racket! What we have here is a government of thieves, or worse yet, a kleptocracy (a government by those who seek chiefly status and personal gain at the expense of the governed) and kakistocracy (government by the least suitable or competent citizens of a state.)”

Moser stated in the document that because he lives outside city limits, he does not get to vote or have a say in the regulation he must abide by.

He also is seeking protection from county law enforcement as a “Whistle Blower because over the last 24 months my house has been attempted to be broken into and/or vandalized. There have been numerous trespassers on my property at all hours of the night. On these occasions when I have recorded a license plate number I was told by our local law enforcement the ‘vehicle’ checked out OK, but what about the people inside? My personal vehicle has been targeted in the last four months by someone who flattened a new tire and destroyed the ignition switch.”